Read the latest news about Marsy's Law for Oklahoma.

April 2022 with Marsy's Law for Oklahoma

April is always a month for remembrance statewide, as 27 years ago, on April 19, Oklahoma City was rocked with violence that forever altered the landscape of central Oklahoma. For 2022, we look forward to getting fully back out in public this year, meeting with our friends and supporters at events, Capitol observances, and one-on-one as we roam the state onboarding a few new advisory board members. We plan to celebrate the expertise and experience of our advisory board and to share approved stories and updates of their continued journeys of resilience and service to the ongoing cause. We aim to secure a Resolution from a State House member, recognizing NCVRW, and we will send purple swag to our closest supporters. Selfies are preferred! We will again start the week off with the purple lighting of Oklahoma City’s Skydance Bridge and look forward to joining our friends at the YWCA for their annual Reduce the Odds fundraiser, raising awareness for Sexual Assault Awareness Month.

February 2022 with Marsy's Law for Oklahoma

February 24, 2022
February was a transitional month for the Marsy’s Law for Oklahoma team. In between follow-up from the inaugural advisory board retreat and beginning to look ahead to National Crime Victims’ Rights Week, the shortest month of the year flew by with tying up loose ends and getting a jump on Spring initiatives. Details are also underway for partnership with law enforcement in creating continuing education on Marsy’s Law and constitutional rights for victims of crime across the state, where officers would review a training video as part of their required annual protocol. The team is also following up on recommendations for up to five new advisory board members, targeting officials in law enforcement and an expert or legal services provider to focus on pro-bono or low-bono needs for victims navigating the system.

January 2022 with Marsy's Law for Oklahoma

The Oklahoma team ended 2021 in high drive, eagerly preparing for an inaugural advisory board retreat in January! Marsy’s Law has a very active board, comprised of ten members spanning a range of survivor/victim experiences and advocate expertise, with outreach touching all four corners of the state and everywhere in between. The board has met quarterly since its inception, in Spring 2020, and works across an agenda of priorities for each year while staying flexible to address current events or potential partnership opportunities as they arise.

December 2021 with Marsy's Law for Oklahoma

December 22, 2021
As uncertainties around the pandemic continued to alter the state of many events and annual gatherings for crime victims across Oklahoma, we were not surprised in the slightest at how our statewide movement and coalition pressed on in 2021. Month over month, our team was proud to host or partner with victims and their supporters in incremental and meaningful ways, and that contagious momentum will carry us into the New Year.
Read More

October 2021 with Marsy's Law for Oklahoma

It is of little secret that 1 in 3 women in Oklahoma has experienced some form of domestic violence (physical or emotional, as defined by state statute) by an intimate partner. So while many advocates and partner events and happenings were restricted or virtual, Domestic Violence Awareness Month in any capacity it’s presented always proves a great opportunity for much-needed awareness, education, and engagement and this year was no different. The MLOK team was proudly in attendance and in support of a range of events, from a family-friendly high heel walkthrough of Chickasha’s town center where men from the community strutted in support of an end to DV, to an online meeting of the minds across sovereign nations committed to resiliency and uplifting their citizens, to a purple flag installation at the state Capitol which offered a visual display of the 100 lives lost to domestic violence over the past year. And while the statistics in our backyard are sometimes hard to see, MLOK remains committed to working alongside victims and advocates this month, and beyond.

August 2021 with Marsy's Law for Oklahoma

MLOK spent the month of August in earnest conversation with elected officials and various leaders and staff of local victims services offices across the state. In meetings with staff members of the state’s Congressional delegation, we discussed new and existing issues we've seen impacting victims and survivors and offered notable resources and access to our local and national teams. We stressed the need for open lines of communication to victims at the local, state, federal, and tribal levels and look forward to further conversation. Our team also met with the Oklahoma State Bureau of Investigation’s Victim Services Director and Victim Services Outreach coordinator for the District Attorney’s Council regarding the annual Homicide Survivors Symposium and the upcoming Domestic Violence Awareness Month in October. We also met with the new Secretary of Public Safety in Oklahoma, to brief her on our initiatives and offer support as she oversees several state agencies that deal directly with crime victims at all stages of the criminal justice process. Lastly, we also hosted our quarterly advisory board meeting and touched base with our awesome 12-member panel!

June 2021 with Marsy's Law for Oklahoma

June was a busy month, mostly behind the scenes, in Oklahoma. After a productive meeting during National Crime Victims’ Rights Week, and a few follow-up emails in May, the team has been working closely with the governor's office this month as they zero in on a July forum in Tulsa that will address tribal jurisdiction and the impact on victims (and the community) as a result of the Supreme Court decision on McGirt v Oklahoma. This work has entailed the team’s outreach to contacts across various levels of federal, state, and local offices, including many victims services organizations and both the Muscogee Nation and the Cherokee Nation. This event may eventually be replicated across the state, but starting in the Tulsa area ensures that victims navigating the recent changes and challenges are addressed first as we near the one-year anniversary of the landmark case.

May 2021 with Marsy's Law for Oklahoma

May 18, 2021
Following a busy NCVRW and the month of April spreading awareness for victims' rights throughout the state, we spent the month of May regrouping on the heels of that momentum. We were contacted by the office of Governor Stitt, in follow-up to our NCVRW meeting, with a request to co-chair a series of public forums this summer to address the impact of the US Supreme Court’s McGirt decision on victims of crime on tribal lands and across various jurisdictions. More to come on that. And we met virtually for our quarterly advisory board meeting, attended by board members, Marsy’s Law for All staff, and Toni Scheihing, Director of VINELink Oklahoma, from the Attorney General’s office as our guest speaker. Toni talked us through system-wide updates coming this fall, built to further empower and educate victims navigating notification concerns and procedures. Toni also sits on the national board for VINE and answered many of our questions. We are proud to be part of these conversations to maintain an open line of communication with our partners, and to continue to serve as a resource for victims of crime no matter what stage they’re processing through the criminal justice system.

April 2021 with Marsy's Law for Oklahoma

April 30, 2021
For 25 years in Oklahoma, April 19 has held space for victims killed in one of the deadliest acts of domestic terrorism in U.S. history, and this year we observed the 40th annual National Crime Victims’ Rights Week statewide alongside victims and survivors of varying types of crime, with the support of advocates, law enforcement and elected officials, from April 18 - 24.
Read More 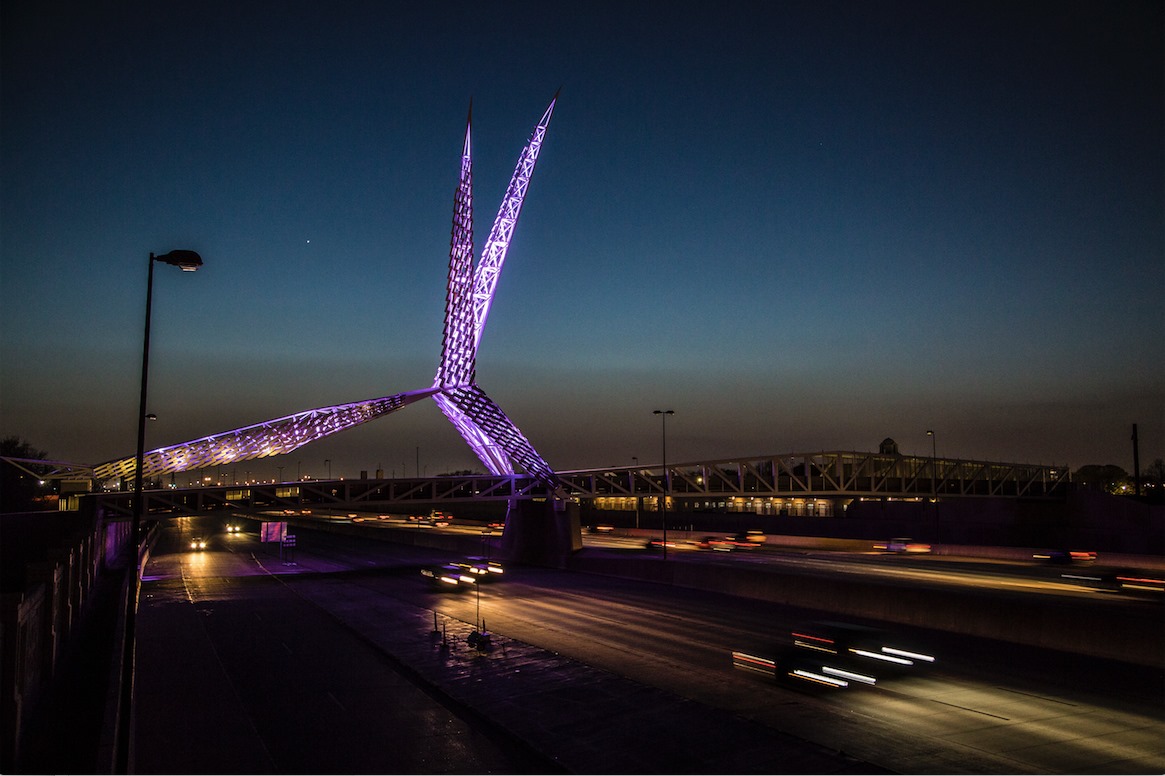 For 25 years in Oklahoma, April has held space for victims killed in one of the deadliest acts of domestic terrorism in U.S. history, and this year we observed the 40th annual National Crime Victims’ Rights Week statewide alongside victims and survivors of varying types of crime, with the support of advocates, law enforcement and elected officials, from April 18 - 24. To kick off the week, we met at the new Scissortail Park in OKC and walked across the Skydance Bridge as it was lit purple, as was the Crystal Bridge half a mile away from downtown, in a private, silent vigil with advisory board members and select volunteers. 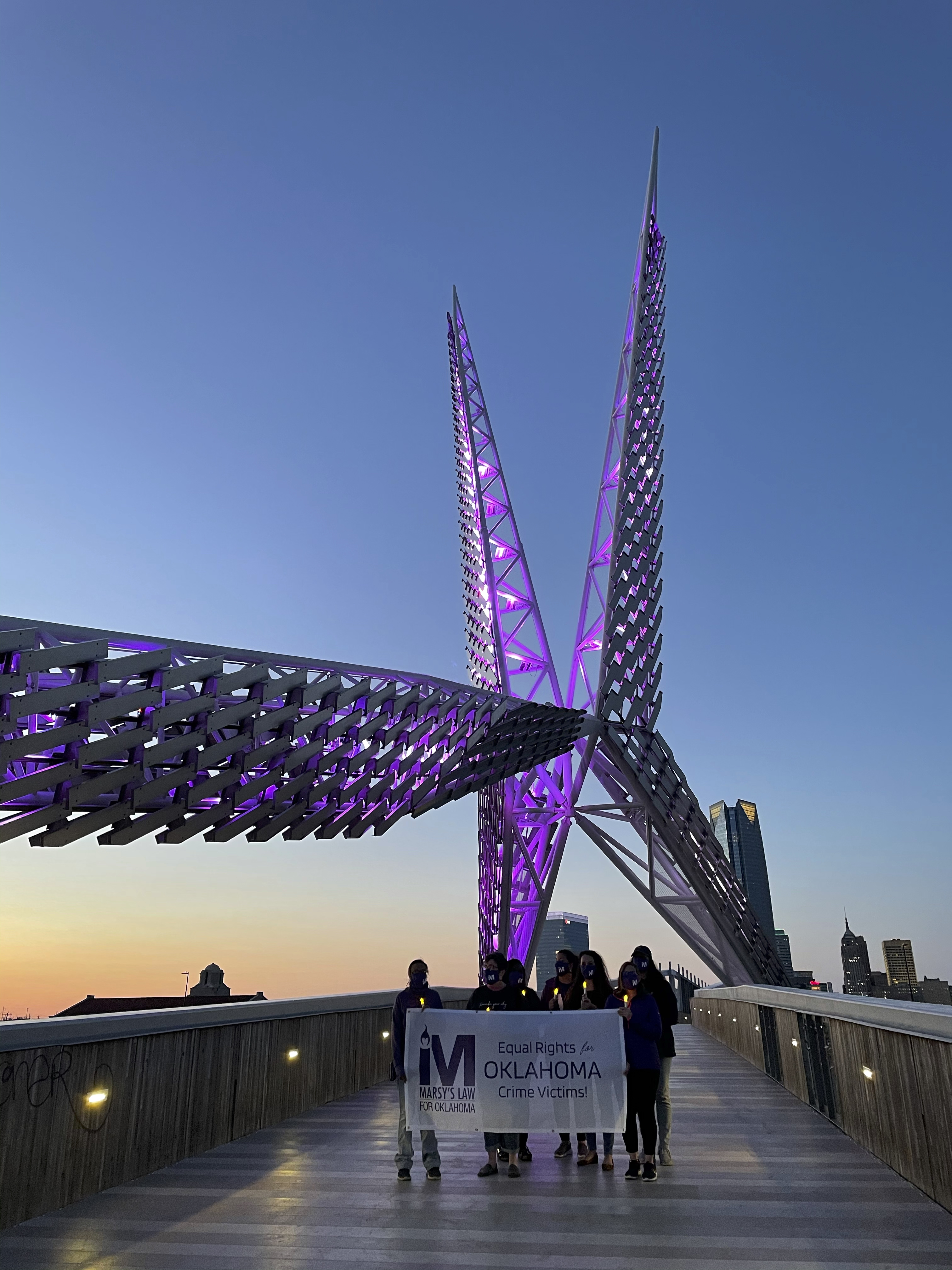